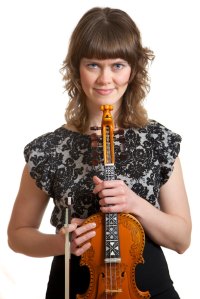 Gro Marie Svidal is a well-established and renowned performer and interpreter of the traditional Norwegian Hardanger fiddle music. She started playing the Hardanger fiddle at the age of five and has immersed herself in the traditional music from Sunnfjord, Hardanger and Voss studying under the fiddle masters Leif Rygg, Håkon Høgemo and Sigmund Eikås. She is an alumna of The Ole Bull Academy for Norwegian Folk Music, and has an executant master’s degree from The Norwegian Academy of Music with dissemination of music as her in-depth study topic.

In 2014, Svidal won first prize at the prestigious national competition, Landskappleiken, and become national champion on her Hardanger fiddle. Furthermore, she has also accepted Norwegian grants and other awards for her music.

Svidal gives concerts in Norway and abroad both as a soloist and in collaboration with musicians from different genres, dancers, storytellers and players. She has performed as actress in theatre plays at Sogn and Fjordane Theatre, and toured extensively in rural Norway giving school performances under the auspices of Arts for Young Audiences of Norway.

Her first solo album, “Hardingfele” was released in 2009, and her second album “Eilov” in 2016. Both albums received critical acclaim from amongst others Songlines, Lira, and Aftenposten and were nominated to the Norwegian Folk Music Award, FolkeLarm-prisen. Svidal has also contributed on several records both folk music albums and pop albums.

In recent years, Svidal has started composing music for the Hardanger fiddle both solo and by mixing the acoustic sound of the instrument with live electronics. In 2017, she composed the music for the dance performance “Sunniva no”. The performance was produced together with stage director Mette Brantzeg and in collaboration with Førde Folke Music Festival and Sogn and Fjordane Theatre. Same year the performances opening night was at the festival.